Travel the world in a bowl of soup

After a long day of traveling from Naoshima to Okayama to Tokyo, all I wanted at the end of the day was a warm dinner that would satisfy the rumbling hunger of my stomach. I knew that I wanted something quite light and easy to stomach, and luckily since I had to transfer to the Joban Line at Ueno Station in Tokyo, I was able to find the perfect place for dinner at the station. I stumbled across the chain soup restaurant "Soup Stock Tokyo." During my travels in Japan, I had seen many of these chain restaurants - in Osaka, in Kyoto, etc. However, I never had the chance to try the place mostly because of the absence of the luxury of time. So, being that I still had an hour before I needed to check in at my Guesthouse, I sat down at one of the modern, European style tables in the shop, and ordered the Soup Set. The Soup Set of ¥980 comes with two bowls of soup and a choice of sesame rice or artisan bread. I ordered the Atlantic Lobster Bisque and the Tokyo Borsch with sesame rice, because I wanted a meal that was a little more satisfying than usual.

The Atlantic Lobster Bisque was rich and creamy, but pleasantly so. Bisque is a smooth and creamy French soup made with seafood, and the bisque served at Soup Stock Tokyo was very authentically French. The soup felt like a luxurious trip to the city of Nice in France. The Tokyo Borsch was the perfect complement to the bisque because borsch is a sour, tart soup, often including tomatoes and beets. The Tokyo Borsch I had did not include any beets, but resembled a more tart minestrone soup. The soup contained potatoes, carrots, beef chunks, and onions. As the bisque was quite creamy, the borsch soup's tart taste balanced out the flavors perfectly, and I was glad I chose rice to go with the two soups. I had a filling dinner that did not leave me feeling bloated, and I can say that I was very pleasantly satisfied with the high quality of food served at Soup Stock Tokyo, and I can confidently say that I would definitely like to pay the store a second visit (or third, or fourth...)!

The Soup Stock Tokyo location I dined at was situated in Ueno Station, so if you're transiting through the station, be sure to stop by and have a taste of the great delicacy that is warm, flavorful soup, with a hint of a Japanese twist on the classic recipes. 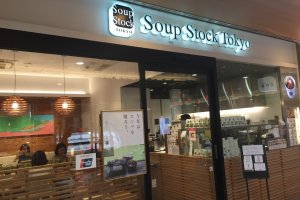 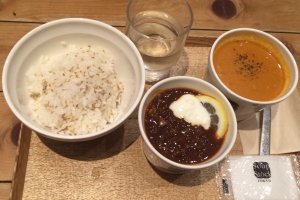 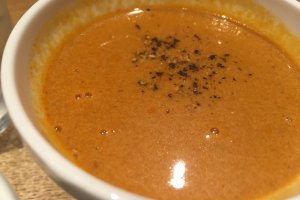